Shoo! - a collective exhibition of artists associated with the ArtBrut Gallery and Studio

Exhibition of the Epidemic Time – Shoo!

Due to the epidemic, the ArtBrut Gallery & Studio had to limit most of its activities, and the artists associated with the Gallery lost direct connection, their place of work and activities. In spite of the difficulties, we managed to transform the activity, launch new ways of communication, create a space for weekly online meetings and gather most of the artists there. The artistic ferment and enthusiasm persisted. During these meetings, among other things, works on the next exhibition at the ArtBrut Gallery were continued. In difficult times and conditions, the artists continue to work, inspired by the world around them, the reality of changing values and new qualities brought by the current frantic and unpredictable time.

The Shoo! exhibition is intended as a defensive reaction, a mythical attempt to drive out the evil, deter it and protect ourselves from the invisible danger. In the history of mankind, epidemics and the ghosts, fears and demons behind them were chased away by what they feared. All over the world, evil has been driven away by terrible images, masks, art, music and rituals. To tame the unknown and the terrifying, totems were erected, taboo spaces were marked and the sacrifice offered.

The exhibition will present artistic works from the period of the social distancing. They were created in artists' homes; in the atmosphere of seclusion and they often refer directly to the reality surrounding us all. Many of them, such as Marta Nawojczyk, Joanna Golachowska or Elwira Zacharska, designed and made their own facemasks, decorating them with original, individual patterns and giving them distinctive colours. There were also full-face masks, altering identity, puzzling, like those by Joanna Golachowska, who decorated one of them with the inscription 'Matrix'. The works by Kamil Łyjak or Agnieszka Kołodziejczyk have a deterrent role, while the mask by Elwira Zacharska in floral patterns or Aleksandra Tsitini have been disturbingly soft. Further, there are also face-shield objects that have been used by Krzysztof Tarnowski to show the tongue and bare dangerous teeth. Andrzej Niedźwiecki, on the other hand, created an enhanced protective object, combining a plastic visor with a helmet and protective net, made in the artist's characteristic style.

The exhibition also includes texts and photographs of the time of the epidemic and self-quarantine by Elwira Zacharska, Krzysztof Tarnowski's cartoon and video clips by Agnieszka Kołodziejczyk. The works by Piotr Jeruzel seem prophetic in the context of time. Twitching spots, colourful dots, a mask painted in a typical style of the author, in the times of a pandemic, acquire a new meaning. They can easily be associated with clusters of bacteria, viruses, with something we cannot control, which is constantly in motion. The same is true of the work by Mateusz Ziomek, glued together from broken glass panes as an attempt to create something new, perhaps an attempt to put together a deconstructed world.

Kamil Łyjak presents new drawings, this time made on a computer, Daniel Stachowski bluntly comments on the reality, while Aleksander Kienc evokes concern with his oneiric work Sinister Demon. A modest picture by Bartosz Runiewski, which has been made by repeatedly touching the surface with a finger, has been gaining completely new qualities during an epidemic and limited physical contact. The objects by Piotr Rymko, on the other hand, do not seem to succumb to a general panic, they are somehow distanced from the surrounding reality.

Some of the works presented at the exhibition come from the collection of the ArtBrut Gallery or from its documentation, and the authors are Marcin Guźla, Mateusz Tatarczyk, Grzegorz Naskręcki, Jacek Kröle and Katinka Kaskeline. The exhibition will also feature a photographic project by Wojciech Chrubasik and an editorial text accompanying the Shoo! exhibition by journalist Katarzyna Kaczorowska.

Wojciech Chrubasik's project is a record of the times of the epidemic – the pictures will show, among other things, portraits of artists associated with the ArtBrut Gallery, taken during the self-quarantine.

Some of the works on display are located in the central part of the main gallery hall on a withered tree mounted there. The idea behind the exhibition is to scare off something that arouses fear and discomfort in us, and therefore we also have a totem where we display many of the works and objects.

The Shoo! exhibition was created in the actual space of the ArtBrut Gallery & Studio, but due to the ongoing epidemiological situation it will be available mainly online. We are not planning a public opening. We would like to invite you to view the documentation from the exhibition and participate in related events presented on the ArtBrut Gallery's website, on social media and on the YouTube channel.

The series of photographs by Wojtek Chrubasik is a documentary project of the self-quarantine times of artists associated with the ArtBrut Gallery.

The reality is rapidly changing. All rational constructs of our human mind, all attempts to subjugate the natural world suffer a serious crisis in clashing with its strength. The rational mental architecture has been severely damaged, if not largely demolished.

And when something collapses, you have to start again.

Today, masks have become part of the daily pandemic. But they are firmly rooted in the spiritual, shamanic realm, that is, the sphere of emotions and feelings, more than a rational calculation.

One must return to primordiality, to the revival of self, flesh and spirit, before returning to our typically human characteristic, which is to calculate, predict the future based on data, i.e. the architecture, building life.

That is why we encouraged the artists to create masks. Moreover, the masks define us now, they have become an element of everyday life, they have become an attribute of epidemics, i.e. the time of destruction. Their shamanic character is an attempt of reconstruction. They are individual requests, expression of emotions. Photographed in the background of the environment that the artists were linked to, on their faces, the masks expose the character of each of these persons. They reveal the atmosphere of every place where they were created. They change the perspective of the surroundings and the image of the experience. 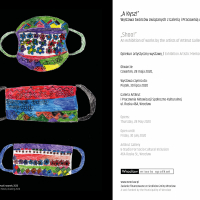 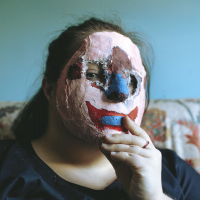 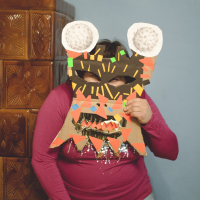 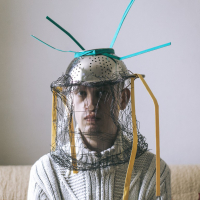 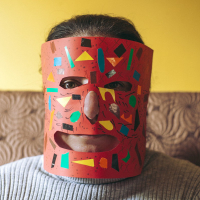 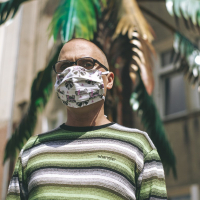 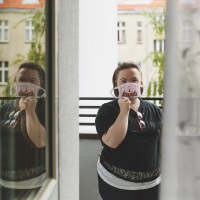 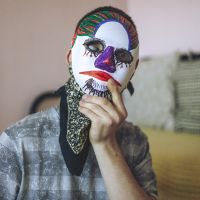 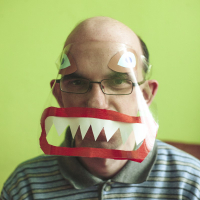 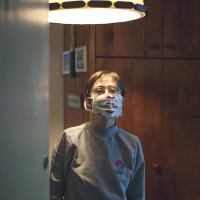 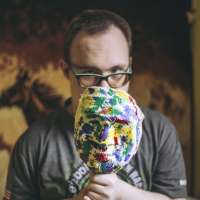 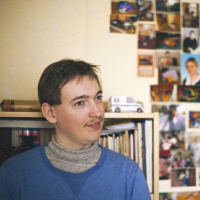 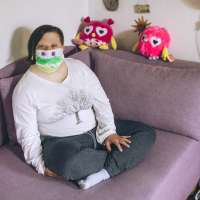 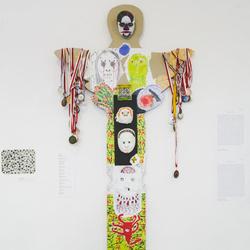 Shoo! - a collective exhibition of artists associated with the Artbrut Gallery and Studio

Show gallery Shoo! - a collective exhibition of artists associated with the Artbrut Gallery and Studio
-A A +A
2020