I AM A PINK TORTE. AND IT'S WORTH EATING ME! - a solo exhibition of Wanda Sidorowicz

Wanda Sidorowicz is a Wrocław artist who has been associated with the ArtBrut Gallery & Studio since its inception in 2009. The current exhibition is her first solo show. The title of the exhibition comes from a fragment of Wanda's poem and refers to one of her most iconic and recognisable works - the installation Pink Torte. Wanda Sidorowicz is a versatile artist - she creates spatial objects using everyday objects, mostly in pink, which is the leitmotif of her art. She has created numerous drawings, small-format paintings and photographs. She writes poetic texts strongly connected with womanhood and her everyday experiences; she is also the author of the libretto to the opera aria Spring Aria. During exhibitions she often initiates spontaneous para-performative actions. The artist was the originator and curator of the PINK project and exhibition organised by the ArtBrut Gallery & Workshops in 2010, in which over 80 people participated - well-known Wroclaw artists, art brut artists and friends.

Texts and works by Wanda Sidorowicz have been included in such publications and books as: I DON'T FIT IN MY SKIN - an art book published by the ArtBrut Gallery & Studio in cooperation with the European Capital of Culture Wrocław 2016; UNDER A COMMON UMBRELLA - a social book published by Wrocław Centre for Social Development; BIURO - Press Agency of BWA Wrocław - art magazine; RITA BAUM - art and literary magazine; and were used in the theatrical performance NOT EXCLUDED LOVE, prepared by students of the Academy of Theatre Arts in Krakow, Wrocław branch.

At the solo exhibition, we present a selection of works from different periods in the artistic work of Wanda Sidorowicz, as well as works prepared specifically for the current exhibition.

Attention! Masks and a safe distance from other visitors are required at the Gallery!

Curator’s text
Individual Exhibition of Wanda Sidorowicz I AM A PINK TORTE. AND IT'S WORTH EATING ME!

Wanda Sidorowicz develops her own individual visual, performative and poetic language through which she manifests female subjectivity, female sexuality, breaks cultural conventions and crosses taboos. The artist creates spatial objects using everyday items, above all in pink, which is the leitmotif of her art. Everyday life, revealed by Wanda Sidorowicz in her objects and texts, is an existential effort, a female effort, a struggle with limitations. However, in Wanda's art, through the form of her works, this everydayness from time to time becomes brighter, abolishes the commonplace to become uncommon. Wanda's pink objects/items are oversized, unnatural. It seems that form is most important. However, the exaggeration, over-stylization and theatricality of her works do not relegate the seriousness of the content to the background; instead, they introduce a free play of meanings. The pink colour for Wanda is exceptional. It is a reference to femininity, however, not the one imposed by the market and culture since the 1990s when the colour pink started to be assigned to girls to define their identity. In Wanda's case, pink reveals the subversive potential of a woman's identity, her life, daily life, thoughts, sexuality, ordinary being and everyday existence. Her writing style, sincere and personal, is marked by sensuality, discontinuity, emotionality and eroticism. Her works that speak of a woman's bodily experience, her desires and dreams are moments of personal transformation, moments of Wanda's passing between Wanda, Wanda and Wanda.

Pink Torte, a work consisting of an object/installation, a poem and a video performance is perhaps the fullest testament to this potential. Wanda's recited words "I am a pink torte, eat me... I am a cake. I’m worth eating. Cover me with icing..." leave a wide range of emotions in the recipient and the viewer. These are feelings associated with affirmation, resistance, submission, eroticism, perversion, intimacy, transgression and finally surrealism straight from the experimental cinema of the 1970s. The constant reversal of senses and meanings is probably permanently present in Wanda's art.

In the work Spring Aria, on the other hand, Wanda takes on the role of an opera diva singing an aria in the purest camp style, yet so poignant at the same time. The artist herself writes of herself "That is to be me, but Wandas are many... I don't fit right with myself...". The broadening of a completely different perception of women in culture and a different understanding of the nature of female creativity, seems eloquent in the poem Palace of Dreams. It takes on a completely different meaning if we think about transgressing cultural norms related to the customs and dreams of women, but also men with mental disabilities. Most of Wanda's works and texts adopt this approach. The already mentioned Pink Torte, a series of pink objects entitled – Barbie, Little Doll House, Pink light bulb, Not of this Earth – refer to popular culture, but also to what is beyond it. They can be seen as a defence strategy against an oppressive social reality. This oppressiveness is also revealed in Wanda's poems such as Problemy (Problems), Niedobra starucha (Mean Crone), Przestań jęczeć (Stop moaning).

One is tempted to think of Wanda's work as parodying the patterns imposed by culture by toying with these conventions, reversing meanings. However, these are personal statements with the purest, most sincere intentions, in which she wants to emotionally move and amaze us.

Dominika Łabądź – artist, activist, doctor of fine arts, curator and culture animator. She is active in interdisciplinary work. Using various media she creates installations, videos and objects. In her work she willingly relies on cooperation and group activities, enabling the circulation of ideas. Many times, her activity is situated between artistic, curatorial and animation disciplines.

The exhibition has been organised within a public task entitled: RUNNING ARTBRUT GALLERY AND STUDIO FOR SOCIO-CULTURAL INCLUSION FOR PERSONS WITH INTELLECTIAL DISABILITIES AND MENTAL DISORDERS IN 2022 financed by the Municipality of Wroclaw. 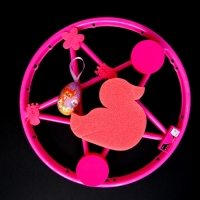