Event accompanying the exhibition I HUMAN

We cordially invite you to an open event, accompanying the solo exhibition of Andrzej Niedźwiecki I HUMAN entitled ART BRUT AND COUNTERCULTURE – RELATIONS, INFLUENCES, CONTEXTS.

During the event, it is planned to watch the exhibition together with the author and artistic supervisor of the exhibition, as well as an open discussion during which the topic of connections between subcultural activities and the output of outsider art will be discussed, the interrelations of both phenomena and reflection on their future.

Art brut and outsider art for a long time remained outside the mainstream of official culture - they were neglected both by the so-called serious critics, as well as the wide audience and were treated as a marginal phenomenon and considered in the category of a titbit, rather than something having a right place in the discourse and in the history of art. The same was true for countercultural movements, subcultures and their artistic output. They were neglected and regarded as temporary rebellious fads. In both cases, however, time has proved that this approach was wrong – art brut began to be recognized as a full-fledged part of art, many of the countercultural movements began to have significant influence on other, also the official segments of culture.

The exhibition has been organised within a public task entitled: RUNNING ARTBRUT GALLERY AND STUDIO FOR SOCIAL & CULTURAL INCLUSION FOR PERSONS WITH INTELLECTIAL DISABILITIES AND MENTAL DISORDERS IN THE YEARS 2016–2018 financed by the Municipality of Wroclaw. 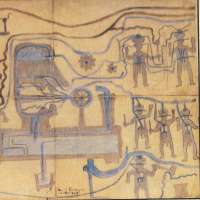