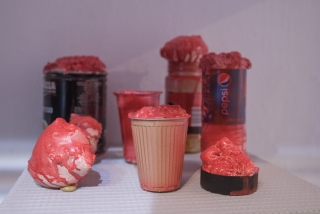 Darek Dera creates installations and objects in which he refers to his culinary passions and kitchen inspirations. In his artistic debut, he presented scented charts, which he composed from a variety of intense spices. In other installations, he perversely placed pictures of people from his closest family in colourful dough moulds or filled food containers with a strange plastic mass. The author's works can be interpreted in the context of the problems of the contemporary world, including human relations and junk food.
Associated with the ArtBrut Gallery & Studio since 2016.